Alex Cooke looks at the hair, the pants and the departure of Swindon Town’s long-serving player, who was told he would be released on Thursday.

Swindon crowds have their favourites. They love down-the-line wingers, they love blood-and-thunder triers, they love goal scorers. Simon Ferry was none of these things and yet, there are few in recent times to receive such universal adulation as the midfielder. 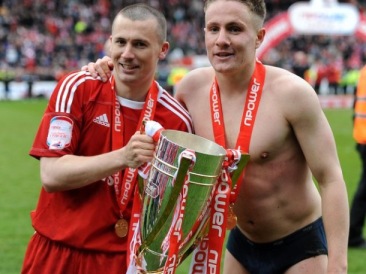 Ferry encapsulated something different. He was effective but also impish. His efficiency in passing, calm in control and reticence in the dribble belied a cheekiness, an exuberance in his play and his off-the-field persona.

His various Twitter accounts were genuinely funny, his hair was often hilarious and his underwear was occasionally all to visible. And so he endeared himself to Swindon fans through charm, not cynical badge-kissing. There was a modesty, an honesty to him. So when I wrote about his passing statistics on here…

This entry was posted in Uncategorized. Bookmark the permalink.